Laminitis is one of the most devastating conditions for horses and horse owners alike.

Painful inflammation starts in the “laminar interface” hoof tissues, which connect the coffin/pedal bone to the interior hoof wall. As laminitis develops, this attachment starts to wear away, causing the coffin bone to shift and point towards the sole. This movement can lead to damage, bruising, pain, and – in very serious cases – the coffin bone may even sink through the extremely sensitive sole.

Laminitis is an especially worrisome condition in that it can affect any horse, regardless of their age, breed, and management.

Causes of Laminitis in Horses

Research shows that laminitis is typically caused by more than one factor. For instance, hoof trauma — like overtrimming or galloping on uneven, hard ground — can increase inflammation in the hoof area. However, in many cases, high intakes of sugars and starches from pasture and grain play the bigger role in the development of laminitis.

Spring, particularly, can be a deadly time of year. As warm weather arrives, grasses start growing and accumulate sugars (called fructans). When too many of these sugars are consumed, this puts horses at risk of developing pasture-induced laminitis.

Is There a Cure for Laminitis in Horses?

Depending on the severity of their condition and course of treatment, most horses are able to recover from laminitis. No matter how mild or severe the case is, however, the best course of action is to always visit a trusted veterinarian.

There is also evidence that starting and maintaining a course of fresh omega-3 fish oil could make a difference for laminitic horses. Here is what we know about how omega-3s work in the body:

It’s well-known in the medical community that equine laminitis often occurs when horses have increased insulin resistance (or, to put it another way, decreased insulin sensitivity). Insulin resistance has been noted in several other equine conditions, such as osteoarthritis, Cushing’s Disease, and equine metabolic syndrome (EMS).

Human and animal studies have shown that omega-3 supplementation may improve insulin sensitivity (1, 2, 3). However, one caveat is that the oil may need to be fresh in order to have beneficial effects. In rat studies, researchers have found that rancid fish oil was harmful and actually increased insulin resistance! Fresh fish oil, on the other hand, improved insulin sensitivity as expected (4, 5).

Omega-3s may also help boost a horse’s immune system by enhancing the functioning of immune cells. A 2013 study revealed that DHA-rich fish oil enhanced the activity of white blood cells in mice.

Studies have also shown that omega-3s can positively regulate the activation – and number – of T-cells (a lymphocyte that actively participates in the immune response) (6).

Immune system deficiencies make it hard for laminitic horses to recover and set them up for secondary infections, so it’s easy to see why boosts in immune function can be beneficial.

At its heart, laminitis is characterized as an inflammatory condition of the hoof. That’s why reducing inflammation is important for helping both prevent and treat the condition.

There is a lot of research that show omega-3 supplementation can reduce inflammation in a variety of species. The omega-3 members EPA and DHA act as substrates for important molecules called protectins and resolvins. These molecules do exactly what their names imply — they help protect against and resolve existing inflammation (7). 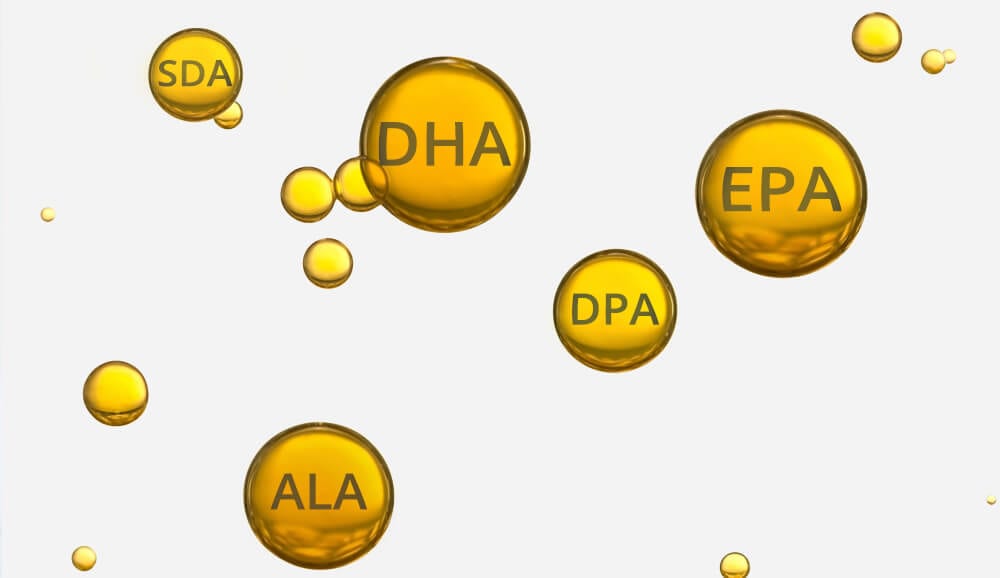 The omega-3 family includes a variety of different molecules, including EPA and DHA. These two long-chained omega-3 fatty acids are considered to be the most important for fighting inflammation.

When including omega-3 supplementation in laminitis treatment, it’s important to consider the dose and source of the supplement.

Plant-based sources of omega-3s like walnuts, flax, and chia only contain the short-chained omega-3 fatty acid ALA (alpha-linolenic acid). Even though ALA can be converted into EPA in the body, there is debate about how much is successfully synthesized in horses.

One study comparing the omega-3 levels of mares given either flaxseed or fish oil, for instance, found that only the horses given fish oil had plasma levels of EPA and DHA in their blood (9). This suggests that not much ALA was converting into EPA or DHA after supplementation.

Since EPA and DHA are known to be more effective in terms of reducing inflammation, these results indicate that supplementing with marine sources of omega-3s will be more effective than flaxseed meal. After all, fish oil naturally contains EPA, DHA and other beneficial omega-3s, readily available for the horse’s cells to use.

How Much Omega-3 Oil Should I Give My Horse?

In humans and horses, the omega-3 dose makes a difference.

The anti-inflammatory benefits of omega-3 supplementation are dose dependent, meaning that to see results, you have to provide enough omega-3s.

While there are no comparative studies on the proper EPA/DHA dose for horses, one study found that supplementing with 324 mg of fish oil/kg of body weight successfully altered the fatty acid profile of horses (10). This dose would be equivalent to providing a 500 kg (1100 pound) horse with about 5.5 fluid ounces of fish oil per day. Other studies have also used somewhat lower doses of both fish oil and EPA/DHA with positive results for inflammation (11).

Based on anecdotal feedback, Wellpride normally suggests feeding horses 1 ounce of its Wellpride fish oil daily as a maintenance dose. But for large horses or horses with severe inflammation, Wellpride typically recommends increasing the daily dose to 2 ounces of Wellpride oil every day for the first 6 to 8 weeks.

For horse owner looking to prevent or treat laminitic damage, feeding a high quality omega-3 fish oil can be a great step in the right direction.

We’ve received countless letters from owners who have fed Wellpride fish oil to horses with hoof issues – with great results! Sammy was nearly put down due to his hoof wall separation and abscessing, and his owner credits his phenomenal recovery to regular Wellpride supplementation.

Wellpride LLLP was co-founded by omega-3 experts Dr. Bo Martinsen and Dr. Anne-Marie Chalmers in 2003 with the support of a veterinarian and researcher consulting team. Wellpride prides itself on making America's #1 fresh fish oil for horses, delivering effective doses of EPA/DHA for optimal joint, digestive, coat, and hoof health.