One year ago, Donna Cahill thought she might lose her older horse, Sammy, when he developed terrible abscesses in his hooves. But after getting Sammy started on Wellpride, Donna says he has made an incredible recovery.

In this interview, Donna shares their story: 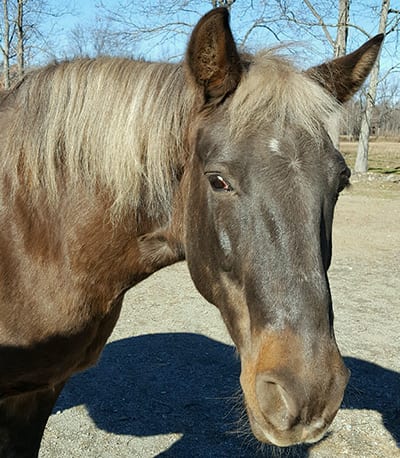 “I was talking with Anne-Marie [Dr. Chalmers, Wellpride’s co-founder]. I was telling her I had a horse with digestive issues, Freddie. You could tell he was in pain all the time. He had bucked me off because he was in pain.

He started on Wellpride and about 3 or 4 months later, we had him scoped. By that time, his ulcers had lessened. He really wasn’t having any issues any longer. His manure was looking better.

Then my other horse, Sammy – he was 21 at the time, he is 22 now – started having a separation between the soft and hard tissue of the hoof wall. It caused abscessing in his hoof. We almost had to put him down.

I was taking omega-3s for myself, and I was noticing that my fingernails and hair were getting better. So I decided to give Sammy the Wellpride for his hooves.

For about a month, I double dosed him. I gave him a dose in the morning and in the afternoon. I figured it couldn’t hurt him since I thought I was going to have to put him down.

I credit Wellpride all the way with saving him. It’s a great product, it really is. And he’s shiny! For a 22 years old, his coat is shiny.”
Advice for Fellow Horse Owners

“I did start off slow with the Wellpride because my horses were detecting I had put something in their food. I started off with a quarter dose and split it between two feedings until they got used to it. Then, a half dose in the morning, a half dose in the afternoon. I mean, it went quickly. Within two weeks I had them on one full dose once a day.

I mixed the Wellpride in there with the grain real good. When you pour [the oil] over, mix it in well.

With extreme cases, like Sammy, I would definitely say double dose.”