Follow one beautiful mare and her owner as they discover how Wellpride works its way into the system over the time, and whether it will help solve Ally’s spookiness, hoof and digestive problems.

Week one and we are off and running! Knock on wood; she is eating her food with the Wellpride in it! Maybe she likes seafood after all!

Let me give you a little back ground on Foreign Dance, aka Ally. She is a 9 year old OTTB mare I purchased as a resale project, after swearing I would never own any horse smaller than 16 hands, a bay, and most certainly never a mare! Well, shiver me timbers, here we are. I have had her for 4 years and love her to pieces.

A few months after I got her, she had a triple fracture of the right front splint bone on the outside just below her knee. A great “leg” vet in the area told me I would be lucky to have a sound pleasure horse but almost definitely not an eventer. I stuck by my new girl, stall rested, shockwave, hand walked, and stood in fear the first time she was turned out- drugged and all! Here we are a few years later, competing at beginner novice and sound as anything! We deal with some minor issues (mareness, ulcers from showing, hot headedness, spook/flightiness, etc) but I wouldn’t trade her for the world.

My hopes for Ally is that the Wellpride will help her deal with gastric issues that may be turning into ulcers, help her think clearly, recover physically after competing, and assist in her hoof quality. She has always had thin walls and brittle feet so let’s see what Wellpride can do! I have attached a few pictures of her the first day on Wellpride. The hoof shot (best I could get for a mare who was far more interested in the round bale) and right front leg shot (the one she fractured) are also included. She is stall kept during the day (summer) and turned out in a dirt field at night (her girlfriend founders so Ally is happier with her than on grass) so she has full access to a round bale. Thanks and I hope to report great news as we travel through Wellpride territory!

Okay! Here is an update.

Ally is eating her Wellpride and I have seen a few minor changes in her but am not sure if it is due to the supplement or the heat at the events! She competed twice this past weekend (one event on Friday then a rescheduled CT- rained out in April). I felt bad for her but knew she would have an easy week this week. On Friday she was focused, ready for work and more attentive to what I was asking her to do. She was still “looky” but didn’t freak out at everything right away. She finished 2nd at BN and I was very happy with her.

Sunday brought a dressage test that resembled the circus act where the clowns jump out of a VW and run around like idiots. However, I don’t think it was due to her being rotten, just burned out from 3 weeks in a row of competing. She did jump clean though to finish 5th (we won’t say out of how many). 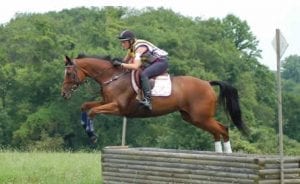 Her coat is great! The dust just sweeps right off of it! Everyone comments on how sleek and soft she is. Her feet are doing well also. She was previously on a hoof supplement so I am still waiting to see if there is any difference between the two. BUT, we still have all our shoes so who can complain! Definitely not the farrier!

I have attached a picture of her at her event on June 7. I will get updated pics at the end of the month! Thanks!

Ally is almost 30 days into her “treatment” and is doing great! I have noticed that her coat is beautiful and just seems to repel dirt (packed mud not included in that). She has been competing but will have the month of July off in preparation for her first recognized event in August at Olney Farm.

She is eating her food with the supplement on it and really seems to like it. Her alertness is definitely still there but when she does spook (which seems to be happening a little less) she is easier to regain control of and her concentration comes back faster. Fishy, uh? 🙂 I have noticed better work from her when she is being ridden and settles into the program faster. She is recovering from strenuous activity a little better too.

I am excited to see what the next 30 days brings. Her feet look great and (knock on wood) we still have all our shoes which use to just exit the hoof at the most inappropriate times!

I have attached some pictures from our cross country schooling (and one dressage show from a CT a few weeks ago) at Fair Hill on June 28. Photo credits all go to Barb Krafft.

Okay, here is an update on Ally and how she is doing. In short, WE LOVE FISH!

She went to her first recognized event on Sunday and was great. We rode after the torrential downpours came through so the dressage ring looked like a swimming pool and she HATES puddles (in the ring). Our test wasn’t perfect but for the ride she gave me, it was decent test. Her focus in all 3 phases was awesome and what was even more impressive was her attitude and how she acted while at the trailer.

My husband, non horsey, was my only help that day and he is a little nervous around her because she can be so “up”. Well, he was holding her, walking her, and just being with her without fearing for his life. She wasn’t screaming for other horses or acting “marish” at all! She stood at the stadium warm up like she was watching everyone go and studying the course. A few months ago, she would have been pacing and screaming for any horse to answer. It felt like a different horse. I even looked down once or twice to make sure I had the right horse! She hung out on the trailer by herself munching on her hay between rides like never before. I should say ever. She used to have to be held all the time, not able to tie to the trailer much less stand on there contently for an extended period of time.

While Wellpride (fish oil) has not made her happy with puddles (synchronized swimming will not be her second career), what it has done in her general attitude, mental focus, coat, and hoof growth/ strength has made us customers for life. I can’t wait to see what being on the product for a year will do for her. Thanks!

I am going to be ordering more in a week or two. She is just starting her last bottle. I simply love this stuff!!!!!! I am even going to start the human supplements! I can’t believe I went this long without using it!!!!

I hope you are having a great vacation. Ally will compete next weekend so I am hoping to have another update with more competition/ horse interaction by then. 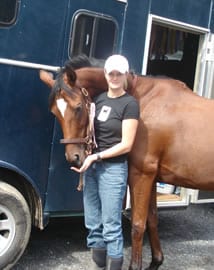 Well, yesterday was awesome! Ally and I competed at Olney Farm (Joppa, MD) in the BN division. The big test wasn’t the event, it was the fact that she had been in the night before due to rain. I was prepared for a wild ride. What I got was a composed, focused, and patient mare! Who’d a thunk it??! I was already a little nervous about XC because she doesn’t have hind shoes and parts of the course resembled a slip and slide. But, let’s start from the beginning.

She cleaned up beautifully and I attribute her coat condition to nothing but the Fish! BEAUTIFUL! She loaded and munched her hay the whole way. We got there and unloaded. She just hung out, eating grass and making sure that no other horse around ate more than she did. Little competitive that way. We warmed up for dressage (our weak part) and she was awesome. I had allotted a little extra time due to being in the night before. Not needed. She settled in nicely, was careful in the mud (warm-up was in a grass field), and within 30 minutes (usually we take 40 to relax) we headed off to the indoor for our test. The actual test wasn’t perfect (rain coming down, shadows, etc) but I had her attention and, although excitable, focus. We won’t tell you the score. At some points our test resembled elephants doing ballet but as the judge said “there were some nice moments, now start connecting them”. Enough said.

Off to stadium! Slick and quick. She paid attention, when I felt her looking at something a slight leg on sent her over it. Before the skittishness would have made us slide to a halt, examine, and possibly run backwards (yes, even at that point I had hopes of her being an eventer- I may be clinically crazy). We went clear, fast but clear.

Head over to cross country. This is where I think the Fish in her is coming out the most. Puddles everywhere and we just pound through them. She was focused and ready for work. She is definitely getting the hang of it because now the start box keeper says GO! and Ally is gone- sometimes forgetting I need to go too! She jumped clean and fast. Her attention is definitely a million times better and she listens to me even better WITH a softer bit in her mouth! Once again “Who’d a thunk it?” I made her trot some of the course as it was slick and not timed (optimum time was posted though). Our issue now is not focus, attention, stress or craziness, it is making her understand that optimum time does not mean how fast you get back to the trailer for the carrots!!!!

She recovered wonderfully. Within 10-15 minutes of going through the finish flags I had an untacked, sponged off mare who was breathing normally and heart rate was good. She was back to being more concerned about the grass intake. Her personality is so much more mellow and laid back. The stress of life isn’t affecting her like it used too. We are even trail riding by ourselves! We wouldn’t have made it out of the driveway alone 4 months ago!

On a side note, I also have noticed that when she does get a little cut or knick, she heals faster. No idea if this is related to the fish but can’t help but think so. If her body is using itself better, why wouldn’t it be. One of the other boarders at my barn is going to be putting her gelding on the Fish and a client at work who has A circuit hunters is switching her mare over to it.

Oh, we finished 5th at Olney so I was tickled pink (literally!) with her!