Helping Your Cribber to Call It Quits

Helping Your Cribber to Call It Quits 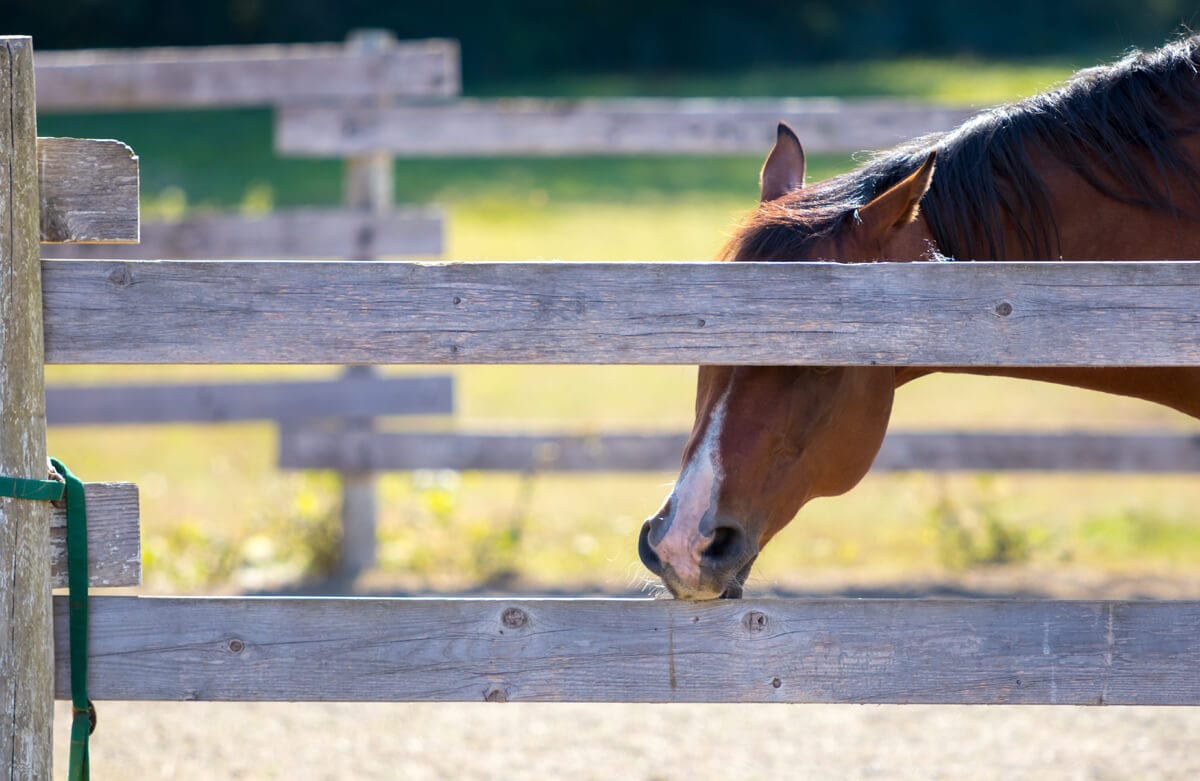 Cribbing is the bane of most barn owner’s existence. It’s so common that almost every horse person knows a horse that cribs. And it can lead to a barn full of destroyed doors, fencing, and other horizontal surfaces.

Cribbing is when a horse grasps an object, often a barn door or water bucket, with his incisors as he arches his neck and pulls back while inhaling air. People will often hear the horse grunt as he cribs. Windsuckers do the same move and produce the same noise but without grabbing onto an object.

Cribbing is considered a stereotypic behavior, which means it is an abnormal repetitive behavior. Often these behaviors indicate poor psychological well-being or a horse that is stressed.

While science has not identified a specific cause, cribbing has been associated with the following:

Various studies have also found a connection between colic and cribbing. Data from a study of 367 horses that were cribbers or windsuckers in England found that 35.4% had one or more episodes of colic. Of 126 horses that presented with colic within the 12 months prior, 54.8% needed a veterinarian.

The Brain Chemistry of a Cribber

Cribbing has its effects on the brain and central nervous system. Researchers have found that cribbers have a decreased variety of dopamine receptors in the dorsomedial striatum of the brain (1).

Horses with stereotypic behaviors also experience an increase in the amount of dopamine in the brain, according to Sebastian McBride, PhD, a researcher at the University of Cambridge, as reported by The Horse magazine. This excess dopamine is caused by stress due to a dysregulation of the neurophysiology of the striatum (or learning center) of the brain. Unfortunately, excess dopamine can lead to permanent structural changes in the striatum and to habit formation, which can thus result in the development and maintenance of stereotypes (2).

An article in The Horse mentions that cribbers have greater activity at rest in the part of the nervous system associated with action and stress (3). In addition, studies show that horses with stereotypical behaviors have higher levels of cortisol (also known as the stress hormone) than normal horses. This could mean these horses are more stressed or frustrated. Meanwhile, horses that crib release endorphins when performing the behavior (4).

One recent study found that the cognitive function of horses can serve as a model to studying neurological dysfunction of people. After all, horses also develop stereotypic behaviors similar to behaviors observed in human disorders, such as Tourette’s syndrome (5). A small study led by Vilma Gabbay, MD, MS, of the NYU Child Study Center at NYU School of Medicine, found that there are benefits to giving children with Tourette’s syndrome omega-3 fatty acids. In the study, the group given omega-3 fatty acids had improvement in tic-related impairment (6). In anecdotal evidence, many parents in forums online also discuss the benefits their child has seen with tics after being on an omega-3 supplement.

Considering that omega-3s have shown promise for helping people with tics and that horses serve as a similar model to people with neurological dysfunction, could we surmise that omega-3s may be able to help with stereotypic behaviors in horses? While science has not specifically addressed this issue yet, it could make for an interesting study.

In addition to damaged barns and fencing, cribbing and windsucking can result in horses with dental abnormalities, temporohyoid osteoarthropathy (a disorder of the hyoid apparatus, or voice box, and associated structures), gastric ulcers, poor body condition and weight loss, epiploic foramen entrapment (when the small intestine moves through a narrow opening connecting two sacs in the abdomen and gets trapped), and colic (7).

We are sharing suggestions made by veterinarians to help cribbers, along with our suggestions on how fish oil can help:

1. Make sure your horse has plenty of forage to eat and provide plenty of turnout time (unless the horse has other conditions that must limit this).

2. Allow the horse to have plenty of social contact with other horses.

3. Do not wean foals too early. In fact, gradual weaning and weaning in groups is preferred. Avoid feeding weanlings concentrates or creep feeding foals.

4. One of the suggestions from veterinarians is to reduce concentrates and sweet feed. However, some horses, such as performance horses or horses with a lower body condition score, need additional calories once concentrates are removed to maintain energy. Supplementing with a fat source can provide those additional calories. In addition, a fat supplement could help cribbers who are in poor body condition or who have lost weight due to cribbing itself. Fish oil is an excellent source of calories from fat that also provides additional benefits.

5. Since many cribbers also have ulcers, determine if your cribber has ulcers and treat accordingly. Since fish oil also helps with ulcers, it can be a great addition to an ulcer treatment plan.

6. There is a theory that feeding too many omega-6s can cause a horse to develop brain-related issues, such as extreme spookiness, unmanageability, anxiety, and cribbing. By reducing the amount of omega-6s in a horse’s diet and balancing them out with supplemental omega-3s, it’s possible for cribbers or horses with other manageability and anxiety issues to become calmer and show a reduction in these behaviors.

7. Cribbing straps are a common deterrent for cribbing since they don’t allow the horse to do the characteristic movement with his neck.

8. Surgery is a final option for cribbing or may need to be an option for those horses whose veterinarian recommends it.

While it’s hard to break the actual cribbing habit once formed, it’s important for horse owners to do what they can to manage the cribbing habit or prevent it from starting in the first place. Using one or more of the strategies above can help horse owners in their fight against this annoying habit.

Sarah Evers Conrad is currently a freelance writer, digital marketer, and founder of All In Stride Marketing in Lexington, KY. As a lifelong horse lover and equestrian, Conrad started her career at The Horse: Your Guide To Equine Health Care magazine. She then worked for the United States Equestrian Federation as Managing Editor of Equestrian magazine and as USEF's Director of E-Communications before a stint as a travel writer. Conrad is currently the Editor of The Instructor magazine and works with a wide range of clients proving content and marketing services.